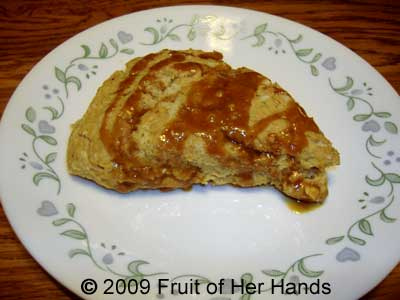 We had pumpkin spice scones as part of dinner last night. I’d never made scones before, but definitely will again. They were absolutely delicious! The other day, Mommyof8blessings asked if I’d share the recipe for my iced coffee. Unfortunately, I usually just dump things into the glass and eyeball it.

Here’s what I use though:

Any flavored creamer would work, but I prefer the vanilla. Vanilla isn’t my favorite for hot coffee, but it is for iced. I’ve also used powdered milk for the milk portion of this, and it’s turned out fine that way as well. 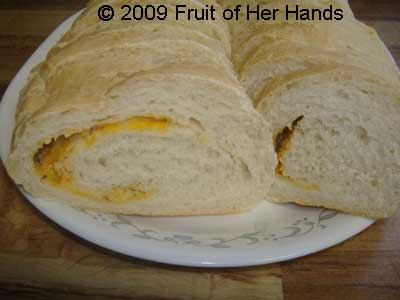 Put first six ingredients in your bread machine in the order listed. Allow machine to run through the dough cycle only.

Remove dough from machine and place on oiled countertop. Roll dough into a large rectangle. Sprinkle cheeses and spices evenly across top, and roll up, jelly-roll style. Pinch edges to seal and place on greased cookie sheet to rise until almost doubled in size.

Bake in preheated 350* oven for about 20 minutes. You may need to cover the top with foil so it doesn’t get too dark while the inside finishes baking.

I made this stromboli-style, and everyone seemed to like it. The next time I make it, I’ll probably just dump the cheese and spices in with the rest of the bread ingredients. Not to make it easier (though it would really simplify it!), but because I think the flavor would be better with the herbs throughout the bread. A few people have asked if I’d share my dill pickle recipe. This is the recipe my grandmother used for years, and she recently told me it’s the recipe her grandmother always used to use. She said she liked it because the ingredients are per jar – making it really easy to make pickles as your cucumbers are ready, instead of having to wait until you have a lot at once.

These pickles also have to age for a while. Mine will sit at least 6 weeks, but longer wouldn’t hurt.

Put salt, vinegar, and dill in bottom of can. Add cucumbers and more dill, finish filling with boiling water and seal up.

Since I’d never made pickles before, I wasn’t convinced that the brine alone would be enough to preserve the pickles. We ran the jars through the water bath canner for 15 minutes (based on another pickle recipe we found). I’m still not 100% sure that’s the best way to do it, but I’m curious.

Today’s afternoon snack was unbelievably delicious – it was a chocolate milkshake with a twist. One of Wendy’s toffee coffee twisted frostys sounded nice, but I had no plans to make the 30-minute drive to go get one.

I wasn’t sure what to do to imitate the flavor since there’s no toffee-flavored anything in the house right now. I finally settled on a chocolate milkshake with coffee flavoring. I only added a tiny bit of instant coffee powder, but the amount of richness it added really surprised me. As a general rule, I do NOT like mocha-flavored coffee, so I was surprised I liked this as well as I did.

Here’s how to make it. This is the small mixer cup for my Magic Bullet knockoff (gotta love Aldi!). It holds about a cup, maybe a cup and a half, tops.

Fill your container most of the way with chocolate ice cream. I used homemade because that’s all we had in the house. Add a splash of milk. In my case, use the rest of the gallon. It was maybe a third of a cup. Dump in about a half teaspoon of instant coffee granules. This was decaf. Insert into blender base. . . Enjoy. This never made it to a fancy cup. It was fantastic. We are absolutely loving yogurt around here lately. Well, we always love it, but it’s been a long time since I’ve made any. With the diet changes we started implementing this week, I decided that having plain yogurt in the house was a good idea again.

The recipe I followed is at A Year of Slow Cooking. I’ve made it before, using a heating pad, but thought I’d try the crockpot method this time. What a difference – it is so sweet it doesn’t need sweetener in it at all if you’re going to eat it plain.

We’ve been making it into breakfast smoothies. We have a mini blender (a Magic Bullet knock-off we found at Aldi), so we just throw a handful of frozen fruit in the cup, pour yogurt over it, add some ice to make it thicker, and blend. Some fruit has needed a tiny bit of sweetener, but not all that we’ve tried.

I’ve made a half gallon at a time. Milk dropped to $2.09 a gallon at Aldi, so a whole gallon of yogurt at that price is wonderful! The sad thing is I already made a second half-gallon of yogurt, and it will probably be gone by Monday or Tuesday if we eat it as fast as we ate the last batch. It sure is good though!

Today I needed bread for tonight’s French toast, so I threw the ingredients into the bread machine to mix. I baked it in the oven instead of the bread machine, but was thrilled with the results. It was so light and fluffy – not something I’m used to with this much wheat flour in it. I’ve only tried this combination of ingredients once, but I’ll be playing with it more, that’s for sure.

Combine ingredients in bread machine pan in order instructed by your manufacturer. When dough is finished mixing, remove from pan, shape into a loaf, and put in greased loaf pan. Let rise until about an inch above the pan sides.

Bake at 350 for about 30 minutes (I lost track of time this time – I usually set the timer but forgot today).

I’ve been searching for the perfect bread recipe – one that uses no white flour but that is still light and soft. I know this still has some white flour in it, but it’s progress.

Combine dry ingredients in medium bowl. Cut in shortening until crumbs are the size of small peas; do not overmix. Gradually add milk. Stir until dough leaves sides of bowl.

Turn dough onto floured surface and knead 10 times. Roll out dough to 1/2 inch thickness and cut out biscuits.

Biscuits are Stephen’s territory around here. While I can make them, his turn out fantastic – even though we use the same recipe! We usually make them with half wheat flour and half all-purpose. We like the heartier texture of the wheat flour better.

You can see our Buttermilk Biscuit recipe here. It’s pretty similar, but not entirely the same. We prefer the buttermilk biscuits over the ones without buttermilk, but we don’t keep buttermilk in the house very often.

Why is it that when I go to do a search for a biscuit recipe, all the recipes call for Bisquick? I’m typing up our biscuit recipe for somebody, and was having some issues typing the instructions (I’ll post it here when I’m done). Our recipe right now is just a list of ingredients, a temperature, and a time to bake them, but I needed a better explanation. Since the recipe is similar to the Betty Crocker recipe, I headed to their site.

I am so disappointed. I expected to find a from-scratch recipe, but I can’t find one. Almost every single basic biscuit recipe I find calls for Bisquick. Sure, that’s easy, but we don’t generally keep that in the house (and on the rare occasion we do have it, it’s a homemade version).

Why is everything so instant today? With a million and a half recipes out there on the internet, why are the easiest to find the ones that aren’t actually from scratch?

Now. . .if I could just find a way to make the delicious biscuits WITHOUT using shortening, and using a better fat. . .

Chocolate chip cookies are the best. I’m waiting for the last pan to come out of the oven right now. After that, I need to get far, far away from the cooling cookies.

The recipe I used is Chocolate Chip Wheat Cookies. I made some modifications this time though – partly due to what we had in the house. :O)

The first change I made was to use butter. We don’t use margarine any more, so that was an easy switch in this recipe.

Instead of vanilla (we’re out), I tried almond flavoring. It was surprisingly good. It was the one change I wasn’t sure we’d like, but it was good.

There is so much controversy about artificial sweeteners and how they affect our bodies. The more I read, the less I’m convinced we need to be consuming so much! So I used less this time, and used real sugar (which also amazes me what it does to our bodies). I will try my best to limit how many cookies I eat. The only things that will make it easier are the three guys in my house who like cookies and the fact that I don’t want to gain 45 pounds with this pregnancy like I did with Caleb.

Anyway – just wanted to share the modifications I made – because they turned out really yummy!