Well, today is Day 1. I’ve tried to eat keto for years now. There were great results right before my surgery, but afterward not so much.

Now I’m to the point where I’m burned out. Sure, keto can produce results, but I have a problem eliminating entire food groups, especially fruits. It just feels like bondage and I’ve had a very hard time sticking to it lately.

Today is a new effort. I want to lose the rest of the baby weight for good. I’ve been hiking more and trying to be more active (slowly, of course, due to my fibromyalgia, but that is what it is).

Hopefully it is as good as everyone says it is. 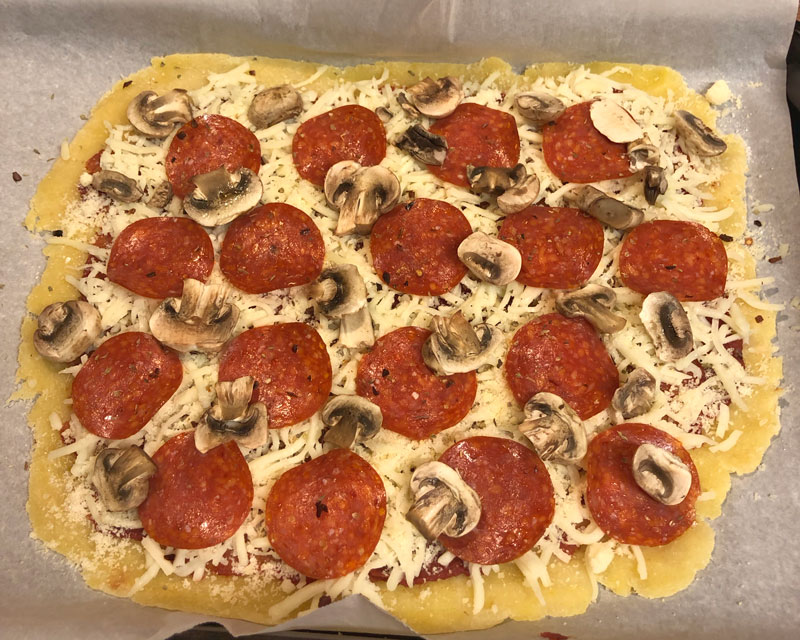 I took a small break from dieting after my surgery, and did a pretty good job maintaining. At the beginning of this month I decided to go back stricter keto again.

Since then I’ve lost 3 pounds, which is encouraging. But what’s more exciting is the non-scale victories.

My tight skirt that I avoided wearing is now comfortable, and even falls down if I place my phone in the back pocket.

A friend told me last week that I had “lost a TON of weight!” – I can’t remember the last time I saw her though.

The leggings I bought in December and hated are now looser and therefore almost comfortable. I thought I bought the correct size, but because I carry my weight around my middle, the waistband was tighter than I like. They’re still not loose enough for me to love them yet, but I can wear them now without hating them. That’s great for the super cold days in the shop now!

And another victory that IS scale relate……I hit the 35 pound mark yesterday! I was very excited to see that in MyFitnessPal. I’ve actually lost 41 pounds since Joy was born, but really didn’t start losing weight until last April.

I also hit my first number goal. At this point my next number goal is down another 20 pounds, with my official “on the record goal” at 35 more pounds, and my personal final goal at 45 more pounds. The last goal may not be realistic because I don’t know how low my body will go now that I’ve had kids. We’ll see.

This has me very excited and motivated to keep going! 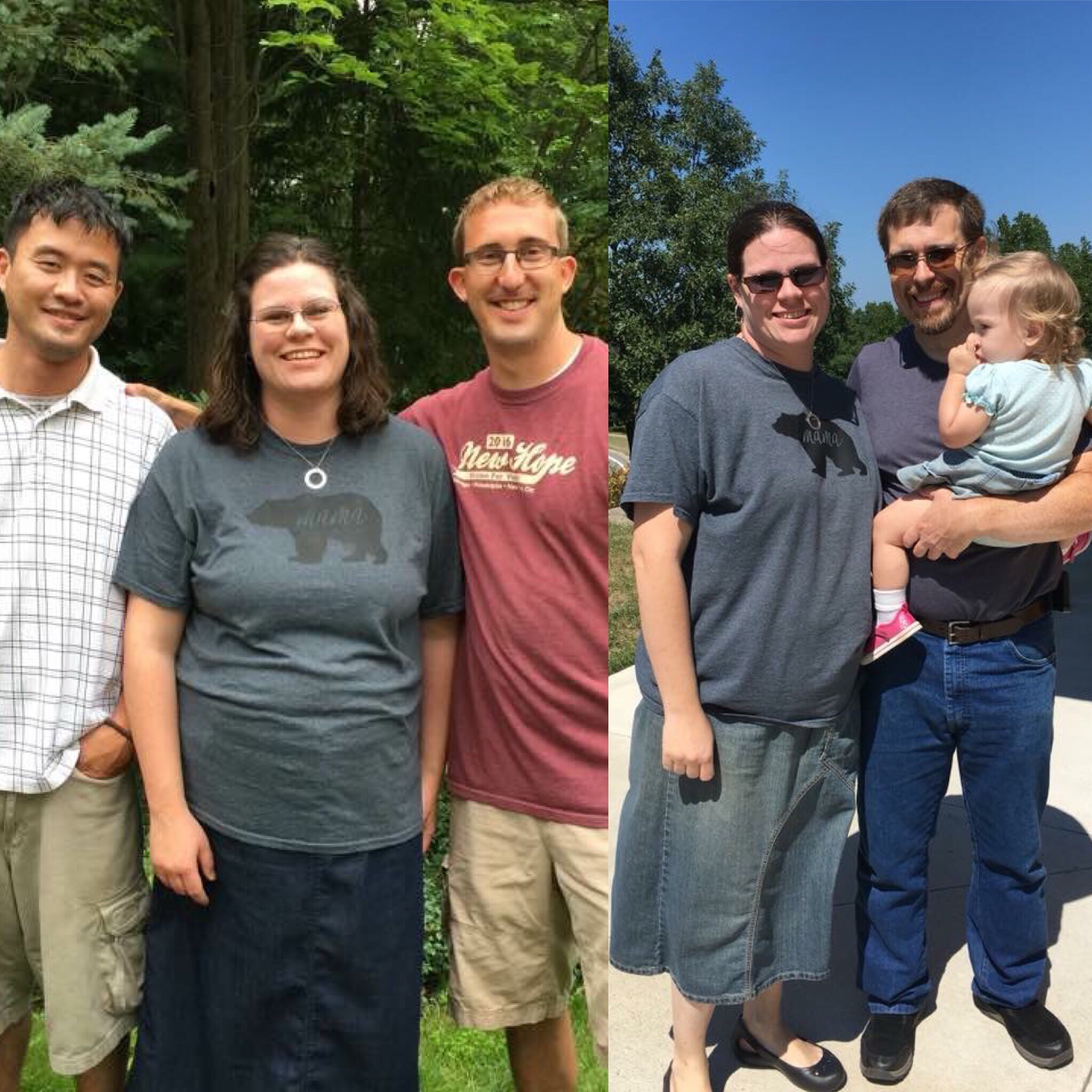 My sister in law took the picture on the right about a week ago when we were up in Michigan. I couldn’t believe the difference when I put the two pictures side by side. They were taken a year apart, and that’s the same shirt. It surprised me how loose the tee is on me now.

What makes me the happiest is I don’t look pregnant all the time any more. After five pregnancies, I don’t expect my body to be the same as it was before kids, but always looking pregnant did bother me.

27 pounds down. I’m not done yet, but seeing progress is so encouraging!

What a difference a year makes.  20 pounds gone.

I started watching what I ate by reducing calories.  It doesn’t work overly well for me, as I can’t eat more than about 1200 calories a day if I want to lose, and that very slowly.  Thank you PCOS.

I started keto April 3rd.  I lost four pounds the first week, and then discovered fat bombs.  I plateaued for about a month at that point – I didn’t realize my snacks were sabotaging my efforts.  Once I realized that, and cut the snacking back out, I started losing at a good rate again.  I’ve lost 14 pounds since April.

This week I hit two milestones – my first personal goal number, and the 20 pound mark.  What’s fun is I’m only 4 pounds away from the number I wanted to hit by my birthday…..which is still 6 weeks away!  I’m really excited to see what number I’ll be then. I seriously doubt I have any male readers, but if you’re a guy who reads my blog, you’re welcome to leave now. I’m not comfortable discussing female issues with you. Thank you.

Are you gone? Good.

Breastfeeding and low supply issues are a topic I’ve come to know quite a bit about. I also know I’m not the only one who struggles with it.

It all started about seven years ago when I learned that it was possible to breastfeed an adopted baby. Once we were matched with Samuel’s birthmother, I started preparation to induce lactation. I pumped multiple times a day and started taking the herbs fenugreek and blessed thistle. I did that for a month, and then he arrived early. They allowed me to nurse him in the NICU, but he was gaining weight too slowly so we stopped so he could be released. Once home, I started again. I was able to nurse him (with the aid of a Lactaid system) until he was six months old.

When I became pregnant with Caleb, I had high hopes for breastfeeding. I incorrectly assumed that we’d get to do it “the easy way.” I knew PCOS often causes low milk supply but hoped it wouldn’t be the case with me. Things were great at first, but I didn’t notice the signs of low supply until it was almost too late.

I did everything. I pumped multiple times a day (including getting up at 4 am to pump when the baby slept all night!). I took herbs. I drank a gallon of Mother’s Milk Tea a day, adding lemon so it would taste like lemonade. The only thing I didn’t try was the Reglan my lactation consultant recommended. At five and a half months, I gave up. I loved nursing, but it had become more a source of stress for me than anything else. I didn’t have the heart to try the Reglan too.

When I found out I was pregnant with Anna, I started praying that things would be different this time. I went in armed with more knowledge, the phone number of an amazing lactation consultant, and sheer determination to make it longer this time around.

Lindsay at Passionate Homemaking posted about increasing milk supply shortly before Anna was born. I ordered the herbs to make the mother’s milk tea so that everything would be in the house if and when I started having supply issues.

Things have been better this time around. It has not been easy the whole time, but overall it has been better. The mother’s milk tea recipe has been a lifesaver. It seems to work far better than the prepackaged tea I used to buy, and is cheaper too, which is great. I do one thing differently than her recipe though. She mentioned she takes fenugreek capsules, but I add whole fenugreek seeds to my tea ball and brew it all together (1 tsp fenugreek seeds and 1 Tbsp tea mix per 8 oz water). The tea doesn’t taste too bad by itself, but with the fenugreek added it is very bitter. The seeds seem to be more effective for me than the capsules were, or I would switch back to the capsules.

It has taken effort at times, and not everybody seems to understand the struggle it can be to maintain sufficient supply. I think that low supply and difficulty breastfeeding is really downplayed, when it’s probably a lot more common than it appears. Many people have asked me why I don’t just use formula (which is another post for another day). Why bother fighting so hard when formula is so easy? But to me, it’s worth the work. I love the quiet time with my little ones. And I just can’t bring myself to buy formula when things are going so well, even if it does take effort. Recently I found more motivation to get off the rest of the post-baby weight. I stumbled across my diabetes scares me post.

Most of the actual baby weight from Anna is gone now. But since I became pregnant again before all the baby weight from Caleb was gone, there’s a bit more to lose yet. Stephen and I have started using the P90X program for exercise. For the most part, I like it. We’re not that far into it though so we’ll see as we get farther.

My weight is still in the danger zone as far as PCOS and insulin resistance issues are concerned though. That’s definitely motivation to get the rest of the weight off!

As of last night, I am 4 pounds away from my pre-pregnancy weight. That was fun to discover! I was able to switch back to pre-pregnancy clothes earlier this week, but finding out how much weight I’d lost was nice too. That was a lot faster than I anticipated.

One thing that wasn’t so fun to discover yesterday though was that Miss Anna and I have thrush. Ouch. Our pediatrician and my lactation consultant are absolutely wonderful though – they called in medicine for me and worked Anna in right away. I’m just thankful we don’t have to go all weekend without relief!

The pediatrician weighed Anna yesterday, and she is just shy of ten pounds. I can’t believe she’s growing that quickly.

And speaking of Anna, she just woke up, so I guess my time here has come to an end. . . Today my order from Mountain Rose Herbs arrived. It was so fun to look through the box at everything.

My original intent for the order was to get supplies to make Nursing Mother Tea. I had a good bit of supply issues when nursing Caleb, so this time, I’m going in armed and ready. Last time, I bought premade teabags by the case, and drank almost a gallon of the tea a day. It helped my supply – but I went through the tea SO quickly! When I found a recipe to make your own tea using bulk herbs, I was thrilled. It helps that I should be able to get roughly double the amount of tea for about the same amount of money.

Then while I was over at the Mountain Rose Herbs site, I ordered a few other things I’ve been wanting to try, like powdered stevia and soap nuts.

I haven’t mixed up the tea yet, and I really can’t wait to try the stevia and the soap nuts!