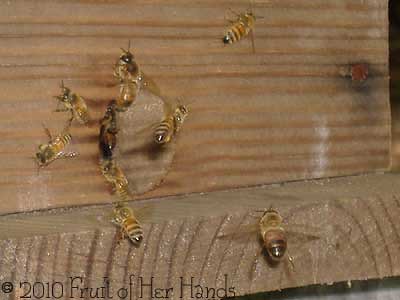 Our beehives did not survive the winter. Unfortunately, this has been common for many of the beekeepers we know. We’re in the process of waiting to see if a beekeeper friend of Stephen’s has enough bees to split his hives for us, but so far, nothing.

In the meantime, Stephen set up a swarm lure to see if we could catch a swarm. We knew there was a feral hive somewhere around here, but we just don’t know where it is. Earlier this week, he noticed some bees flying around it checking it out. Thursday he heard buzzing, and discovered that a swarm really had decided to call our little nuc home.

On Friday Stephen moved the frames over to a slightly bigger hive body. He said they’re even building comb already. I don’t know that much about bees yet (though I have been reading), but it sounded pretty fast to me.

I like this picture that Stephen took – it’s so interesting to compare the differences between worker bees and drones.

The neat thing is we’d all been praying that God would let us catch a swarm. And He did.

4 thoughts on “A swarm found us”