Before Anna was born, I started a couple sewing projects to keep me occupied while I waited. One of the projects was baby shoes. I got this little pink pair cut out, but didn’t sew them up until about a week ago. They’re really cute, but are almost too small already. I used the reversible shoe pattern from maked.ca. 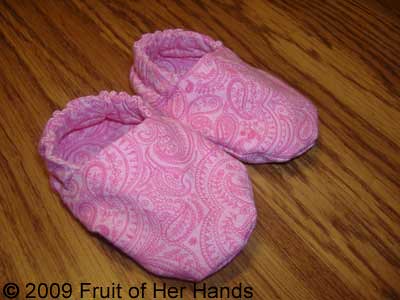 Those were so fun that I decided I wanted to try another pattern. I found a tutorial for Mary Jane style shoes. I made a few changes though.

This pink shoe was an experiment. I sewed them by hand at my mother-in-law’s house last night, and it went together faster than I thought it would. I love it, but made a few mistakes. It’s way too big, the opening to turn it is on the outside, and the straps are too far forward on the shoe. They’ll still be useable, though. :O) 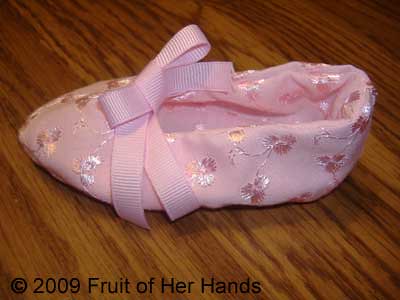 Then I figured I’d make a smaller pair. The fit is perfect. I made these on the machine, and the order I sewed them in made some of the seams really difficult. It was actually a LOT easier by hand. The ties here are almost too far back, but they’ll work. I plan on having Anna wear these to church in the morning. 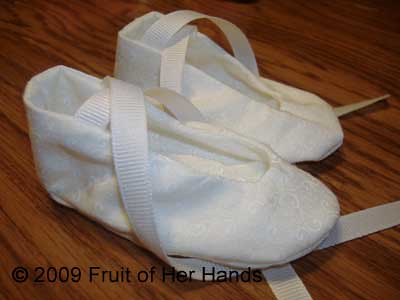 Another thing I made today is a little pair of bloomers to go under Anna’s dresses. I would just put tights on her, but they don’t fit over her cloth diapers very well. Plus, bloomers just look cute. 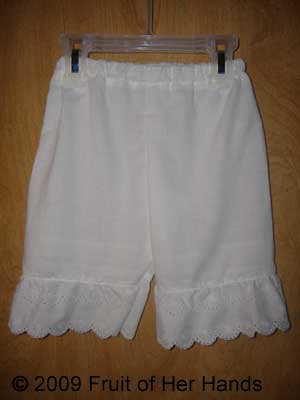 They’re a basic pants pattern that I shortened a good bit. I put ruffles on some that I made earlier, but when I saw this eyelet ruffle at the store this week, I knew I wanted to try it instead. 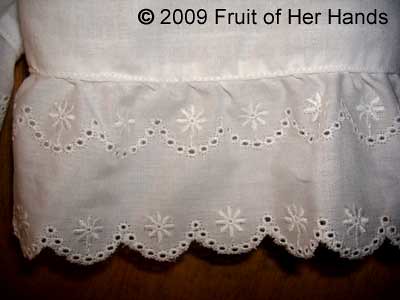 Here’s a look at them with the dress for tomorrow. 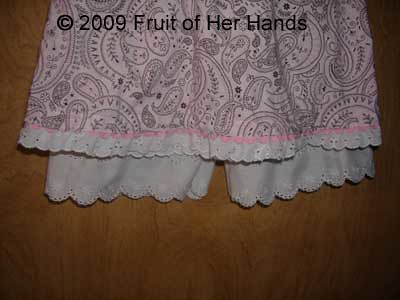