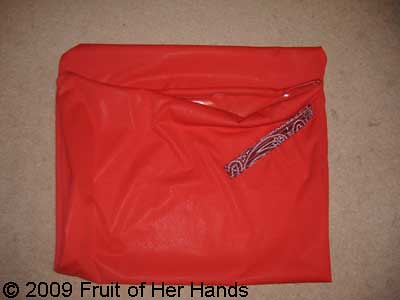 Recently I switched to using wetbags for storing wet and dirty diapers. It’s been amazing how the zip-top bag keeps the smell down so much better than the lidded pail we used to use. Even with three days’ worth of soiled diapers, you can’t smell them when the bag is closed. That sure couldn’t be said about the pail we had.

A lady I know from Hannah’s Prayer was kind enough to send me a yard of polyurethane laminate (PUL) to make a bag with. There was enough for a big one for the boys’ room, as well as a smaller one for the diaper bag, with a little bit left over. I liked the bags so well that I ordered some more PUL to make another large one. I just finished it today. The red of the strap doesn’t match as well as I thought it would, but that’s ok. Now I have two of each size – one to use while the other is in the wash.

The PUL was a real challenge to sew because it kept sticking to my presser foot of my machine. I lined the presser foot with masking tape, which worked somewhat. If I were do sew any more PUL though, a walking foot would be a wise investment. At the moment though, I don’t have plans to sew much more of it very soon!